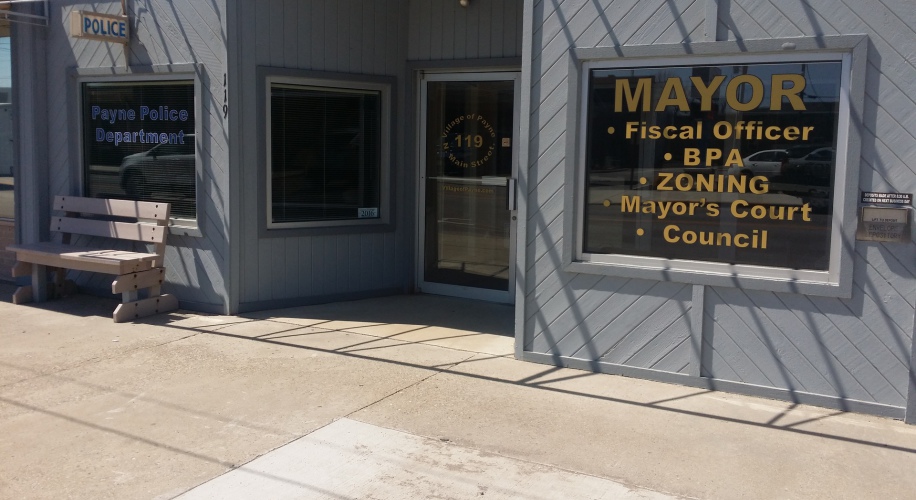 The Village of Payne

Did You Know These interesting Facts

Called Flat Rock City and Malottville as early as 1872

1872 showed the start of the Railroad. After several sales and much work it was completed by Nickel Plate in 1881. The first paseenger train arrived on October 23, 1882

1884 had a population of 1,000. There were three hotels, 30 businesses, 4 saw mills, a stave factory (made barrels), and a bucket factory. The town was growing rapidly and people came to see about renting, but property was not available at that time. Payne was becoming a thriving community and several large fires slowed growth.

The most disastrous fire was on July 4, 1898 when many businesses were destroyed.

1906 showed paving complete from Main Street at half todays width. Upon completion speed iimit had to be set at 8 mph thru business district and 15 mph elsewhere due to local sports speeding thru town on horses and buggies.

1907 showed a strike by tomatoe peelers, demanding an increase from 3 cents per bucket peeled to 4 cents. It was then offerered to raise to 4 cents if peelers would carry their own bucket of tomatoes. The peelers refused and a compromise was reached at 3.5 cents per bucket peeled and wages were increased by 2.5 cents per hour worked. The owners were told no children under 14 years of age were allowed to work as they belogned in school. The company threatened to leave if further problems were encountered. They were worried that the 75 cents per day for peelers woulld hurt them. The company overcame and continued. 69 were employed and filled 22 freight cars annually. it was destroyed by fire in 1922.

1920 showed a financial burden on the Village as resources were not available to operate streetlights. No coal, water tank empty and Village coffers empty. Power was shut off at 10 pm. Power plant solicited 25 cents per month for power. it was overcome and lights stayed on.

The park pond is shaped like the State of Ohio

1891 was the first class to graduate from Payne and 1971 was the last. In 1972 they became WT Raiders after consolidation.

"A Great Place to Live and Grow"